This doesn’t have much to do with religion, but I was recently reminded of the wheel dog. The wheel dog is a member of a sled dog team, attached directly to the sled. There can be one wheel dog or two, but they must be tied to the sled. Everyone is familiar with the lead dog, and that all the other dogs have the same view. You can google wheel dog and get a sense of what they do, but the best explanation I have found is in James Michener’s “Alaska”.

The wheel dog takes the power of the team, the brute force of the dogs in the middle who are not leaders, and transfers that power to the sled. A good wheel dog can make for a very smooth ride. Without a good wheel dog, the guy in the sled is going to get jerked around and will be very tired by the end of the day.

I prefer this position on a team. Trouble is, when it comes to people assembling people teams, most people have never heard of it. The guy hitching up the team puts the leaders up front and just randomly throws the rest together. Or worse, the team is expected to sort itself out and hitch itself up, without the benefit of opposable thumbs. When one person shows some initiative to organize or to speak for the group or just remember the agenda, that person gets pushed up to the front.

In rare cases, the wheel dog is able to also be a lead dog, and someone fills in the wheel dog position. The story of Aaron becoming a spokesman and assistant for Moses is one of those rare cases. Usually, the team becomes a team without leadership. Team members complain to whoever they think the leader is, and that person complains that they are not the leader. No one is absorbing the complaints and the work turns into a death march toward the deadline.
Posted by LaustenN at 12:43 PM No comments:

Labels: community, getting along, leadership

In Spanish, the word for “story” is “historia”. That is also the word for “history”. So when using the word “historia”, you usually are indicating a mostly truthful story. Another word for “story” is “cuento”. This word indicates there is some fantasy in the story. You would use this to indicate someone is telling a “tall tale”. There is probably some truth, but there is at least some exaggeration. It is not as strong as our word “mythology” which in Spanish is “mitologia”.

This is a cuento.

The UMC has a slogan “Open Hearts, Open Minds, Open Doors”. What that means is, they do not have a specific set of fundamental terms or conditions that must be met in order to be considered for membership. They have no requirements for anyone who wants to come in and share communion. As an example, if you have ever attended a Catholic service, you may have noticed that they do have requirements.

Recently the Methodists have begun to take this a step further and encourage members to walk out of the doors of their churches and meet their communities face to face. Many church members are already connected to their communities in many ways, but church leadership is specifically suggesting taking actions as a church, such as cleaning up a park, or organizing some events for families.

I was privileged recently to be with a few members of a little church in Northern MN as they did this in a very profound way. They went all the way to the country of Colombia and then further into parts of that country that even citizens of Colombia rarely visit. We helped to complete construction on a clinic there and brought soccer balls and other sports equipment for the children.

We also visited the growing United Methodist churches. It is a very different culture. People live on “Colombian time”, things start when they start, and some people show up late, and some leave early. The children put on dance numbers for us that would be the talk of the town if they had been shown on television here, let alone in a church. 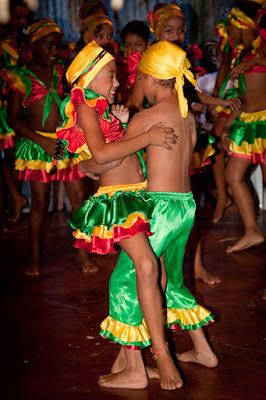 On the last night of the trip, we crammed two visits to churches into one evening. This involved a couple hundred kilometers of driving and the usual amount of hurry up then wait that is involved with any group excursion. After a long day of work, this adventure was quite exhausting. We did not find time for dinner until 10PM.

Did I mention it is also very hot. When we arrived at the 2nd church, the musicians were just getting set up, so I knew I had a few minutes. The service was in the upstairs of the building. It was open to the air in parts, but the downstairs was several degrees cooler and had a breeze. I could feel myself getting light headed when I was sitting in the area for the service.

We were travelling with the Bishop of Colombia and his personal assistant, who needed to keep us in line and organized. Every move we made was a big production, so instead of asking permission, I decided it would be easier to apologize later, and I walked off. I walked past our driver, who was more than a driver, he had become a friend and he was a member of the family of the Bishop. Within a couple minutes, I bumped in to two other members of the team buying water at one of the stores, so the team knew where I was.

We had drove through the town square to get there, so I decided to walk up there and look at what food they might have for sale. My Spanish was “broken”, but I was gaining confidence, and I had met enough Colombians to know they would help me through it. There were many open businesses and people, so even though there are still paramilitaries in the country, I had no reason to believe they would be bold enough to pass through all of the Colombia police forces and into the center of town.

Bananas have always worked well for me as a snack food. They seem to have just what I need when I am starving. In tropical places like Colombia, they are quite easy to come by. I went into one of the stores and said, “es posible, dos bananas?” The somewhat quizzical look on his face told me my accent was terrible, and I was the only white person anyway, so I’m sure he was curious about why I was there, but he understood me. When learning a language, lessons usually start with the basics, using proper grammar. When going into a store at 8:30pm in Sampues Colombia, you can expect some slang. After setting down the bananas in front of me, he said something like, “temas”. I responded with something like, “huh?” After a few more exchanges I understood that he was asking if I would like anything else, and I said, “oh, yeah, nada mas.”

Next was the money part. Minnesotans generally don’t negotiate price. This was not a price negotiating situation fortunately. He said the price, but because he slurred together the number and “ciento”, the word for 100, I didn’t quite get it. I pulled out a 20,000 peso bill. This would be the equivalent of using a US$20 bill to buy a pack of gum. I was going to need some change for cab rides the next day, so I actually knew what I was doing, but his eyes went quite large and he laughed a little, as if I was willing to pay that much for such a small item.

These stores are not unlike convenience stores in large American cities, they don’t carry a lot of change. In America they make frequent deposits into safes that the employees put money into, but cannot open, so if they are robbed, the robber won’t get much. He asked for a smaller bill. I wasn’t up to trying to explain why I wanted change, and also I just wanted to be nice, so I dug out my smaller bills. To them, this appeared more like they were helping me understand my money. In English, out loud, I said, “you know you guys could have took me for a lot more”, they didn’t understand the words, but they knew what I meant. I am getting close to being able to tell and understand jokes in Spanish.

At that point, the conversation switched to asking about who I was and who they were and why we were all there. One of them motioned to another, a very handsome and well built young man. Colombia is full of beautiful people. He came over and spoke very clear English with me. He had learned the language serving with the Ecuadorian army in Iraq recently and he was due to return. I didn’t quite understand why a Colombian was serving with the Ecuadorian army, but it wasn’t important. I thanked him for his service and told him I was glad that he had returned and wished him luck. We shook hands and I went back to church.

I sat down on the steps of the church and ate my bananas. I hope I didn’t give them a bad reputation when I fell asleep and snored like a bear. Members of the church were arriving late, leaving early, and one family left then came back, maybe to get some ice cream for the kids, I don’t know. I had a nice chat with them, just simple stuff about the weather and that my home is “circa de Canada y los lagos grande.”

I am not much for ritual, but I am religiously curious, so when I could hear the familiar sound of the Bishop’s voice followed in each sentence by the voice of our interpreter/pastor, I drug my tired body upstairs to hear the sermon. The sermon was about getting out of the walls of the church, the theme I mentioned above and thus the title of this blog entry. Next time you are in an airport or anywhere multilingualism is the norm, you might notice the signs near the exits that say “salir”.

Later, I found out that my fellow mission team members were not too happy about me walking off. They were concerned about the paramilitaries and I think they were still operating as if this was Minnesota, where everyone is expected to be in their seat when the service begins, I’m really not sure what it was that we misunderstood about each other’s actions. I’m sure they were just generally concerned for me personally and I appreciate that.

But I wonder if they heard the same sermon I did.
Posted by LaustenN at 9:21 AM No comments: