Next, and possibly last in my GMO series of blogposts:
Ground rules for the discussion
Previous GMO post

Here’s another defender of the people; Vandana Shiva. She is an organizer and advocate for people in India and elsewhere. Moyers introduces her story and includes the usual statements about Monsanto suing farmers and mentions something about farmers committing suicide. She is quite animated. Can’t really fault her for that. Moyers uses the language of a reporter, saying what each side “claims” without saying who is ultimately correct.

But what does she really say? She starts with a quote from Krishna, then some twisting of her training in physics and a rewriting of the history of the scientific revolution, claiming it denied the connections in nature. While denigrating corporations, she slips in a piece of data to defend her small farming ethic. She says small farming produces 80% of the food in the world. This would seem unsupportive of her claims that Monsanto is taking over.

Moyers is respectful of her, but laughs a little when she calls modern science patriarchal. He then challenges her with the idea that globalization is “interconnectedness” just like small farming and quantum physics. But it’s not the type of interconnectedness she is talking about it. She knows of the land wars and water wars that come from greed. She sees how globalization leads to divisions. She wants to reclaim our common humanity and our recognition that we are Earth’s citizens. She doesn’t say where this was before the corporations allegedly took it. Aside from some isolated scriptures that claim a connection to the earth, history is mostly a story of conquerors. The idea of a common humanity and citizens of the Earth is a 20th century one.

Moyers then asks what the issue is with Monsanto. Her answer is poetic, about renewing life. She scoffs as she explains that seeds are now intellectual property and then gives some history that led to what she calls a corporate dictatorship. Given her earlier mistakes about history I find this questionable. She only names some players and some agreements made then jumps to her conclusion that corporations are taking over.

She feels strongly about this, enough to file a suit. Moyers points out that this was thrown out of court because it was an attempt to create a controversy where it doesn’t exist. He asks “how are they getting away with it.” She doesn’t really answer that, she only repeats what she thinks they are doing, and makes some accusations about government deals. It is the old song of; these are secret back room deals that we all know about. As part of her evidence, she cites a one-sided documentary, “The World According to Monsanto”.

Shiva says, “President Bush is on record” in this film, asking Monsanto, “What do you want us to do?” They show the clip. It’s Bush meeting with someone from Monsanto in a plant somewhere, filmed by a shaky handheld camera. This looks like a normal political visit of a company, not an official meeting of any kind. The two are talking informally and Bush looks pretty disinterested in the guy. He does make a general comment about “being in the dereg business”, but that the entire Bush/Reagan cadre was pro-deregulation is hardly news.

Bill again presents the other side of the argument, that GMOs produce more. Shiva’s evidence against this is cotton production, pesticides hurting neighboring crops, and the spread of pesticide resistant weeds and pests. Again she misses an opportunity to provide evidence for this while she wasted so much time in the interview quoting Krishna and conspiracy movies. Moyers does not press these issues. Instead he asks for a solution.

She advocates for everyone considering how they play a part, and no one can argue with that. If we ate less junk food, the world would be better off. Farmer’s markets are on the rise and that makes a huge difference. “Healthy food is a right for all”, says Shiva. I couldn’t agree more. So show me exactly how GMOs are unhealthy and I’ll get on board.

She comes back to the suicides by farmers in India and very loosely relates them to Monsanto cotton. These same suicides have been linked to micro-loans by people who against them. Abusing statistics like this, when there are real people behind them is low. The cause of all these suicides has not been established.  A couple breaths later she uses the word “brain-washing” in references to corporations. I wonder how she sleeps.

Vandana Shiva has a message that resonates, and as I point out, much of it is wise. She is however long on ideology and short on facts. She is a great figure head and can create a following, but any movement needs data, evidence and details to back it up. She is not the right person for that, and I’m still not sure that this movement has that anywhere.
Posted by LaustenN at 7:24 AM 1 comment:

I prefer talking with people who accept and even applaud those who question existing knowledge, based on evidence, rather than those who claim knowledge with no evidence and attack those who question them.The 13th century Roman Catholic version of this was to burn people at the stake for questioning dogma. The 21st century version is to accuse people of supporting the status quo because they want evidence for a conspiracy theory. 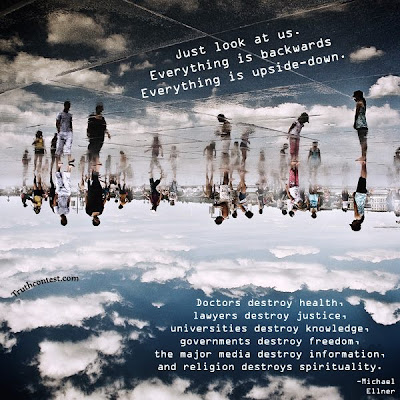