Can Coke be a "true" craft soda

Coca-cola seems to be trying to move in on the market of small batch, specialty sodas. This one is paradoxical mix of pure cane sugar and stevia. Stevia is a natural sugar substitute. The cane sugar is a throwback to a few decades ago when all soda used it. It's easy to find Mountain Dew and others putting out batches made with pure cane sugar. It's a little better. You can decide for yourself what kind of sweetener is better for you. 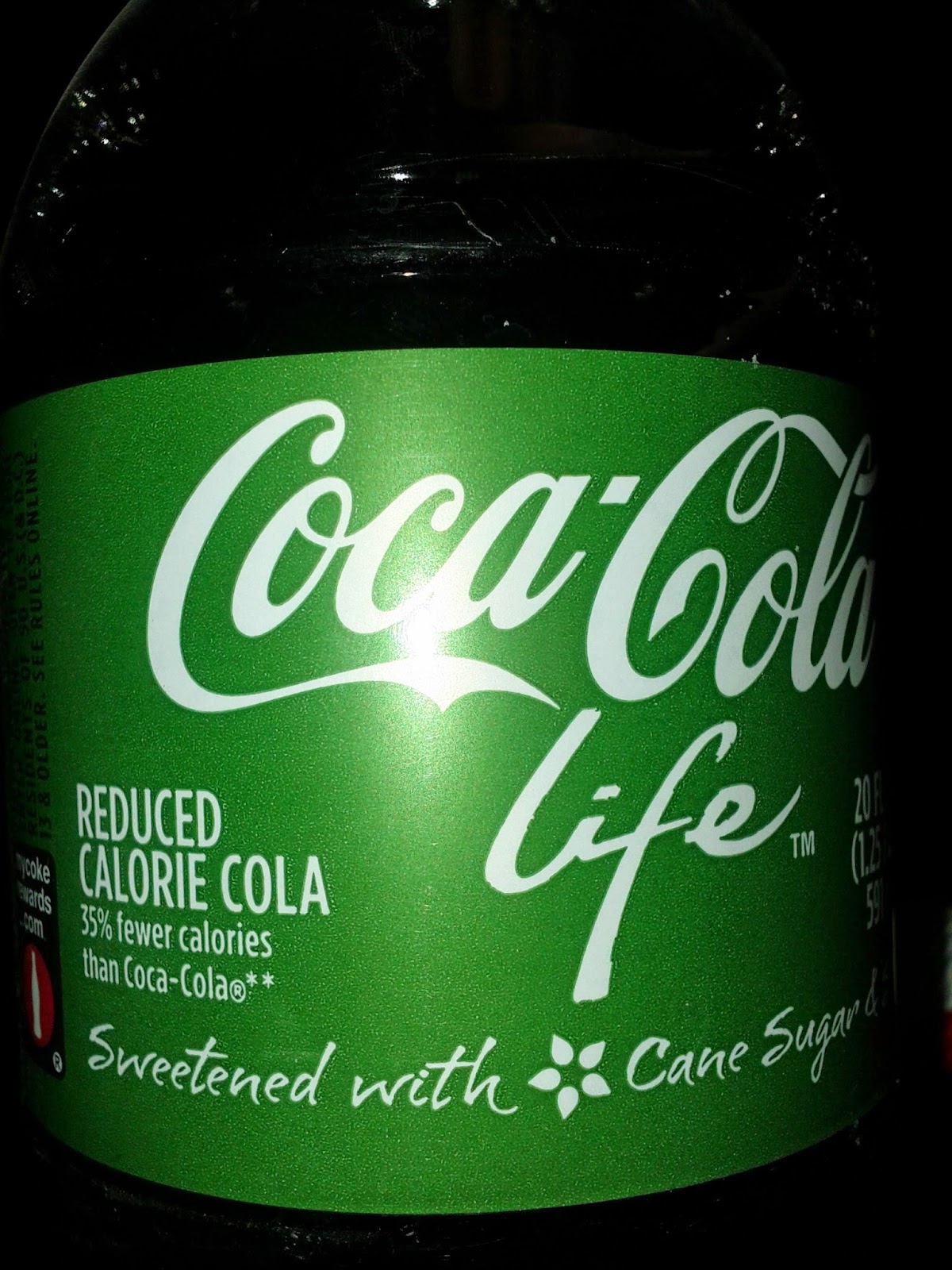 As for Coke Life, it tastes kinda like you would expect it to. It's sweet, but there is the diet taste there also. It's still Coke, which now tastes like Pepsi anyway. So, if you don't pick one of these up, you're not missing much.
Posted by LaustenN at 8:02 AM No comments:

I don’t usually do current events, but this Prayer Breakfast thing has got my knickers in a knot and I’m not seeing the kind of commentary on it that I think should be out there. There's a link to the video of the speech if you follow the Christian Science Monitor below. I’m not going to comment on anything that came out of “Right Wing Watch” or Breitbart or any other such extreme news sources. I’m mostly disappointed in the response by news sources that are still widely read and are supposed to be neutral. I’m disappointed too in the lack of response by those further left, who have mostly focused on the over the top response of the right, missing the actual message from the nation’s leader.
If you missed this news, here is the line that everyone is talking about. Taken by itself it could be critiqued in many ways. Taken in context, where he spends a few minutes talking about people misusing theology, then goes on to discuss the value of being humble in the face of violence and anger, it makes much more sense:


“Lest we get on our high horse and think this is unique to some other place, remember that during the Crusades and the Inquisition, people committed terrible deeds in the name of Christ. In our home country, slavery and Jim Crow all too often was justified in the name of Christ.”
I think these messages getting misunderstood is a symptom of the misplacement of the religion desk in media in general. It is off to the side, expected to come up with something around Christmas and Easter, but not much else. People who are not well versed on the topic are left to comment on it and we get a lot of bad information. I’ll give them the benefit of the doubt and hope they are not purposely giving us misinformation. In a time of war with nations and groups that justify their actions with religion, I think we need reporters who better understand the background.

Case in point, Chuck Todd on Meet the Press lauded Jon Meachem, his guest to start off the subject of the Prayer Breakfast speech. Chuck said if anybody knew this subject, Meachem did. They focused on the words “Crusades” and a little on “slavery”, and missed most of the rest of the speech. Chuck is supposed to talk politics, so I’ll give him a pass, but Meachem, a historian said, “Christianity has reformed itself”. That is inexcusable.

You can read my other blogs on that topic, as well as many others, or you can simply ask when did that happen? Everyone is tripping over themselves to point out the Crusades were 700 years ago, but I don’t remember them ending with a declaration that they were wrong. Nor did the Catholics elect reformists Popes when they had the chance in the years preceding Calvin and Luther. That’s why we call it the PROTESTANT reformation. And those two guys weren’t the most peaceful either.

If you think the reformation was some kind of peaceful transition of power, ask an Anabaptist. Their protests and demands for rights led to 100 years of war. Meanwhile people were heading off to America to escape religious oppression. Their progeny saw the contradiction of escaping persecution but having no problem with slavery in 1688.  It still took 200 more years and a Civil War to get actual legislation and if you think that settled it, read a book.

If you think the bad feelings ended in the 17th century, ask your grandmother about how big of a deal it was for Catholics to marry non-Catholics and ask yourself if you’d want your sister to marry an atheist. Or look at more recent events. In Vatican II, the church finally made some truly liberal declarations, that was 1963. They’ve done nothing but backtrack since, except a few like Oscar Romero, a priest who spoke for peace against right-wing violence in his country. He was gunned down in 1980. The military groups that did it got funding from the US and the Vatican was conveniently quiet about it until just a couple weeks ago.

Most states in the US had statements about official religions in their original constitutions. People didn’t come here and proclaim they want all faiths to be considered equal, they came here to start local governments with their religion as the basis and they wanted the federal government to stay out of it. The power of Kings to tell people how to worship was taken away from them by the people. Then, in the US, those state constitutional laws were declared invalid by the Supreme Court, and there are people alive today who are still not happy about it. So what does it mean that “Christianity reformed itself”?

But my litany here should not convince anyone. I could easily be missing or ignoring or deliberately hiding some history where religious leaders met and agreed to leave each other’s flocks alone. There could be speeches out there where religious leaders tell politicians not to mention their God in a speech about war. There could be someone other than Buddhist monk Thich Nhat Hahn who said you can do my practices or not, it’s okay with him. There could be books co-authored by Imams and Rabbis discussing their mutual desire for peace and how both of their scriptures support it. Please link to them in the comments.

And please don’t list some obscure quote from Bonheoffer or Chrysostom or Erasmus. These people were oppressed in their time, just like Martin Luther King was in ours. Of course there were always dissenting voices speaking out against the violence and corruption in the church. That’s because there has always been violence and corruption in the church. It was the enacting of laws that tamed religion. Laws against burning people at the stake, the repeal of apostasy laws, laws requiring people to use doctors for their children not just prayer, the whole concept of a nation as opposed to a monarchy ordained by God reformed Christianity, not itself.

Now that I’ve got that out of the way, what can we find in the press about this?

One of the few shining examples is PatheosProgressive Secular Humanist blog. It headlined with Obama’s mention of the right of every person to practice no faith at all and also covered the range of his comments.

On the opposite end of the spectrum Bloomberg.com headlined: “Obama Trolls Prayer Breakfast” They included a full quote from Charles Krauthammer of Fox News, "What’s important is what’s happening now, Christianity no longer goes on Crusades, and it gave up the Inquisition a while ago. The Book of Joshua is knee deep in blood; that story is over too. The story of today, of our generation, is the fact that the overwhelming volume of the violence and the barbarism that we are seeing in the world, from Nigeria, to Paris, all the way to Pakistan, and even to the Philippines, the island of Mindanao in the Philippines, is coming from one source, and that’s from inside Islam."

It also quotes Rick Santorum who claimed Christians led abolition, Civil Rights and charity groups, and then he twists Obama’s words, saying he meant Christians “cannot stand up against” ISIS.

Not only does Krauthammer admit the Bible is violent then immediately dismiss it as irrelevant, he dismisses all the violence done by nations with Protestant leaders in the recent decades as if it has nothing to do with their religious upbringing or nothing to do with the wars and protests we are currently experiencing. Santorum tries to put words in Obama’s mouth and is just as fallacious in his logic.

The New York Times did a short balanced peice, highlighting the call for equality.

WaPo said Obama missed the mark, that the crusades were 700 years ago, and slavery was condemned by Christianity. Another simply lazy, 8th grade level of analysis of history. The US came late to the game of condemning slavery and Christians were divided on it as any cursory examination of the Civil War will tell you. And there are still people alive who think the South was right.

CNN choose to focus on the comments to the Dalai Lama who was in the audience and the significance of that to our relationship with China.

The IJReview tried to argue that saying Jim Crow laws are supported by the Bible is “tenuous at best”. That’s true in the sense that saying there is any connection from the Bible to any actual law on the books is “tenuous at best”. Other than that it is misleading and simplistic. They also noted the variety of references Obama made to bad theology promoting violence. I’ll give them points for that.

NBC News did a very neutral report, simply providing a range of quotes that summarized the speech well  without much comment. I’ll give them a link.

Christian Science Monitor did a great job. They quoted Limbaugh and others, and even allowed speculation of the “trolling”, but offered as a counter, “But it’s more likely that he was taking the ecumenical setting of the prayer breakfast to try to reiterate something that’s been a US talking point since the Bush administration: America is not at war with Islam. It is fighting individuals who use distorted versions of faith as a weapon.” They continue to follow the context and flow of the logic, “Then he tries to make clear that it is people who are doing the twisting and misusing here. It is not inherent in religion itself.”

I don’t completely agree with the idea that Islam or any religion doesn’t have some powerful messages about violence, but the way Obama said it is exactly what I want my President to say. Regardless of cultural influences, in a country that is founded on freedom, it is most important that we allow people the freedom to state that their culture does not define them, that their choice of church doesn’t define them. We’re the ones who are supposed to be promoting universal principles. If you want to claim those principles agree with your religion, you’re welcome to, and the rest of us welcome you. If you want to claim your God disagrees with freedom, fairness and compassion, I defend your right to say that, but expect you to respect my right to say you are wrong.