A case for humanism

I wanted to finish up something I said I would do. I said I would discuss the positive sides of the Phillip Kitcher interview by Ryan Bell. I ripped into them a few months ago for their vague references to atheist writers. The interview starts to pick up into a more positive side around a half hour. They start talking about how to build on what we've learned in the past. Some of that might have been encoded within religions.

As I mentioned back in June, Kitcher says opportunity should extend to everyone, with a few reasonable limits. Kitcher says things like extreme egalitarianism, the idea we are born dependent, and we need help becoming useful to that society that we depended are part of what religion has taught and passed on.

He goes on to ask, how do we make sense of the limits of a human life? And says that is answerable, but the bigger question is, how do we build a world where all people have the opportunity to be meaningful within those limits? Religion accomplishes the tasks of community and support, he says. They manage the claims we have on one another, he says. He mentions Bernie Sanders as someone who supports those values, and only for him does he say that Bernie didn't come up with the ideas. He doesn't discuss details of HOW religion does this job. But that is only criticism of exclusion, maybe he says that in one of his books, and he has some ideas about 5 minutes later, so hang in there, keep listening.

Kitcher says the message of the Sermon on the Mount includes the lessons of distributing wealth and giving others opportunities. That could be argued, but I won't because the reason he brings it up is to say this message is mostly ignored. Ryan compares this to the middle class humanist who is comfortable and doesn't notice or doesn't address the half of the world living in poverty. So there are many in this boat. We could discuss causes but Kitcher proposes some solutions, so let's stick to that. He says, what we need to provide for everyone is:

Opportunities, especially early in life, to be well educated
To have health taken care, or at least the means available
To be cared for by people who love them
Have the opportunity to participate in a nurturing society
To chose their own career paths
To discover where their talents lie
To choose their life path based on the above

Kitcher points out no government is providing services at this level. Ryan sees this as the responsibility of those who have these things, not just governments. Obviously we need an agreed upon way to manage services like this. Kitcher sticks to the ideals and talks about how our sense of purpose comes from our projects and our skills that we can employ that we see as part of something bigger, not the toys or even the political influence we might wield. That "competitive materialism" is unsatisfying. Kitcher attributes this thought to the Pope. Personally, I found it in Pink Floyd's Dark Side of the Moon, so I think we can say these ideas are integrated into modern society.

They end on a well articulated point about how religion acts as a filter to our human connections instead of a highlight of the importance of those connections. It seemed to almost contradict some of the things he said earlier, but I'll give him the benefit of the doubt and hope he just didn't feel the need to mention it. Just slightly paraphrasing here, Kitcher says,

"It's not just that we have no evidence for transcendent reality, but it's a distraction. It invites us to think of our horizontal relations to one another as if they are sanctioned or rendered important by our vertical common relation to some transcendent something, i.e. 'We are all children of God'. It is an unnecessary and often problematic detour."

He goes on to paraphrase John Robinson from his book "Honest to God". The important thing is our relationship to other human beings, they shouldn't be filtered through the "fact" that we are all some servants or children or worshipers of God. The relationships to each other should just simply be there freestanding, independent and at the center and focus of all of our lives and all of our concerns.  So, humanism can make use of what religion has discovered, but in the end, it has to cut free.

Posted by LaustenN at 2:29 PM No comments:

This is a tough Veteran's day for me. I have been mostly untouched by the horrors of war, but I understand its necessity. I honor my Uncles who served, and I'm glad they did not see terrible combat. I respect my fellow workers who are vets, they are often the best people in the room. I know war ended the tyrannical systems of the 19th century and stopped the fascist systems of the 20th. I've seen us get better at fighting with less collateral damage and at talking it out so we don't fire a shot. 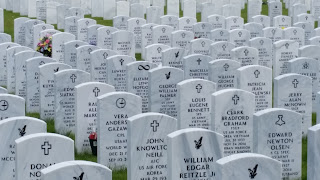 I've let go of some of my ideals of a perfectly peaceful world, but I will never let go of the possibility of that. I doubt I will live long enough to see a world that is as peaceful as I would like it to be, as peaceful as I think it can possibly be. What I don't get is, why would anyone not want to see us improve on the current state of affairs?

I get it that war makes you tough, it builds character, it's reality, you have to fight for freedom every day, no justice no peace, all that. But comparing kids today to the 18 year old kids who stormed the beaches at Normandy, is not a contest I care to judge. Watch the opening to “Saving Private Ryan”. Those kids were crying and wetting their pants. Most of them died. This is not something we need to put every generation through just to make them somehow better people.

And the next generation watched wars on television, and watched their friends leave and not come back. Since then, we have fought low level wars, police actions, and supported UN peace keeping missions. We deal now more with PTSD and people with artificial limbs, but people are still dying. War is not going away. Can we think about it a little before we ramp it up?

When I see the kids at colleges today who are crying over the election, I see kids who have not seen the world my parents and grandparents saw, and that's good. That means they did their job of making a better world. You could say they did a better job than any generation for thousands of years. Those kids grew up believing things were getting better. They saw love increasing. They saw cities getting cleaned up. They saw marginalized voices getting expressed.  They saw nations helping nations. You're darn right I want to wrap them in a blanket and tell them it's going to be okay, because it's my job now to make it okay. It's want I was trying to create when I marched against “nukes” in the Reagan years, and I understand it's what the good men and women in Afghanistan and Iraq and Syria want too.

We should all want a world where we have to describe war to children. It should be something they read about in the history books and see only in digital films that were transferred from some earlier technology that is now in a museum somewhere. It's going to be hard for some generation someday to impress on those kids that there is evil out there somewhere and that ethical systems allow for self defense in the right circumstances. But wouldn't we all rather be facing that challenge than teaching them how to act around a wounded vet, or giving them the choice of one presidential candidate that wants war slightly less than the other?
Posted by LaustenN at 2:46 PM 1 comment: