Okay, I spent the last two blogs talking about Enlightenment philosophers. Hopefully you noted I wrote about the variety of thoughts that were being thunk at that time and how they played against each other. I have also written in the past in a not-so favorable manner about the Enlightenment. So, was the Enlightenment a good thing or not? This entry will sort some of that out.

Enlightenment thinking was an improvement over the decision making process that had been used prior to that. Prior to that, the occasional genius thought stuff up and the rest of us could chose to believe him or not (it was almost always a him). So we had Confucius or Jesus, Aristotle or Moses. Frequently your choice would be determined by your parents or the law telling you to believe or die. The Enlightenment thinkers figured out how to avoid the punishments of the Inquistion but they were still just sitting down at a table with a pen and thinking about it. 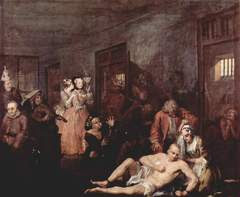 The eighth painting in the series "The Rake's Progress" where the fashionable come to watch the whacky antics of the mentally ill.
When you stop and think about where ethics come from or how the world began, you are using a rational thought process, so it was natural for these philosophers to assume that humans are rational thinking beings. When we decide that we shalt not kill, it isn’t God telling us not to do that, we figured out that if we didn’t kill anybody we would be happier. We don’t covet our neighbor’s wife because we don’t want our neighbor coveting our wife. We’ll all be happier if we agree on that, right? This was eventually immortalized in the famous words that we are endowed “with certain unalienable Rights, that among these are Life, Liberty and the pursuit of Happiness.” It is this idea of calculating our maximum happiness that forms much of the theory of capitalism and our modern way of looking at the world.

The problem is, we are not rational at all. It took a couple hundred years before anyone stopped and did any analysis of these ideas or any experiments on how people really think. Economists only experimented with ways to trick us into buying things. They came up with elaborate theories about how allowing people with money to do whatever they want will somehow benefit all of us. Never mind that they got that money by putting a value on our labor then skimming off some of that value into their pockets.

But before I get off on a liberal politics rant, let’s get back to how we think. The first time I heard of Prospect Theory was on TV and radio shows about money. Studies were done that showed that people don’t think straight when it comes to money. If you were given $30, then given a 50/50 chance to win or lose $9, 70% of you would take that bet. But, given the choice of getting $30 for certain or a coin flip to get either $21 or $39 dollars, only 43% take the coin flip. The two scenarios have exactly the same odds. The only difference is when you make the decision. We generally don’t calculate odds, we base our decisions on irrational things like is the $30 in our wallet or not.

What the TV and radio shows did not tell me is that this theory was not developed by economists, it was developed by psychologists. They had to convince the economists that everything they had been basing their theories on for 300 years was wrong. In 2002, these psychologists, Tversky and Kahneman won the Nobel Prize in Economics. Of course that doesn’t mean that economists really care. They still tell us that the trickledown theory really works.

What does this tell us about the science vs. religion debate? 300 years ago some well off people just decided that we were rational thinking creatures, that there was no mystery to where ideas come from. This flew in the face of thousands of years of tradition but also in the face of anyone who thought about it and wondered why they got mad at some stupid little thing or lusted after something they knew they could never have. This was thrown in the bucket of irrationality, something those Enlightenment philosophers were above of course. If you didn’t understand rationality, you were probably just born that way and incapable of understanding them. And they wondered why some people didn’t like them.

Ironically, it took the ultimate tool of rational thinking, the scientific method, to prove that we are not rational thinkers after all.
Posted by LaustenN at 10:46 AM No comments:

Tsunamis, Then and Now 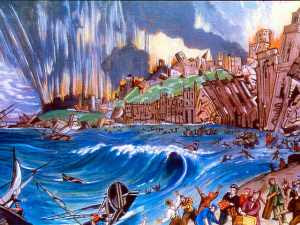 In 1755 there was an earthquake off the coast of Portugal. Early estimates were that up to 100,000 of the 300,000 people in Lisbon died as a result of the tsunami, the buildings falling and the fires. There were three reactions to this disaster that provide interesting parallels to reactions that we see today. The priests blamed the sinners, some of the new humanists blamed modern society for concentrating people in cities, and a few people took it upon themselves to investigate the nature of the event.

The priests were not marginalized nor made fun of like Pat Robertson in 2008 when he blamed the Haiti earthquake on a voodoo witch doctor that had made a deal with the devil 200 years earlier. These priests were able to freely roam the city and collect whatever rumors they might find of people who had not done their prayers or slept with the wrong person or whatever they might want to connect to the earthquake. That the earthquake occurred on All Saint’s Day just added to their reasoning, and I am using a very broad definition of “reasoning”. The accused were gathered together and ritually burned as a symbol of the eternity in hell that they were headed for.

Rousseau wrote a piece claiming that the number of deaths would not have occurred if people had not concentrated in cities, unnaturally. If they had been spread out in the hills in smaller buildings the tsunami would have been something interesting that happened somewhere away from most people and didn’t affect them much. This of course ignores all of the possible disasters that could befall people living in the hills in primitive dwellings.

Voltaire heard of all of this and used the power of his pen to respond. He wrote letters and poems and sat down for 3 days and immortalized the earthquake in the short story Candide. Candide is a fast paced story of an optimistic young man travelling around the globe finding fortune and misfortune. It is a mix of Quentin Tarantino, Monty Python and the Canterbury Tales. He wrote to satirize not only religion, but Optimism. Optimism was becoming an alternative to religion in the French Enlightenment and Voltaire saw no more reason in it than in the mythology of Christianity.

Voltaire was enjoying the pleasures of old age after battling the church throughout his life and bringing to light a new age of reason and rationality. He had the ear of royalty and aristocracy and had the means to help people who did not have such advantages. Voltaire was one of the last men who could speak and write on almost any subject and be considered an expert. Knowledge has grown too much since then and disciplines too specialized. People still write about how our cities should be built or where, but very few of them could stand out like Voltaire. When one person speaks or writes today, a hundred more claim greater knowledge and the rest of us find it difficult to invest the time to sort it all out.

We may have learned to not blindly trust the authority of the previous generation, but that generation had just as many and more obstacles to developing critical thinking skills as the current one does. We may not have Jesuit Priests roaming the streets looking for anyone asking the wrong questions, but we do have Fox News, Rush Limbaugh, Nintendo, NASCAR, Lady Gaga and Newt Gingrich muddying the waters of information. The school system never quite caught up with the rapid changes of science. In the rush to teach us how to get to the moon, it didn’t have time to teach us how to think about whether or not that was the right priority. 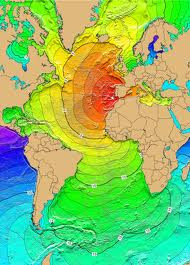 There was a study a while back that showed that recently more studies come out that refute earlier studies. For many, the reaction to this is to dismiss all studies. That misses the point of studying. Science has not figured everything out, if it did, it would stop. We owe a deep debt of gratitude to those who first started studying and asking questions in a critical way, a way that admitted that we didn’t know what was going on, that we were fallible and vulnerable, but that maybe we could figure it out by doing something other than sitting in a darkened room and making up explanations or referring to 2,000 year old books. The people who studied the causes and effects of the quake are now part of a long tradition. This is the first documented case of someone studying an earthquake. Letters were sent out around the area asking what they experienced. This resulted in much more conservative numbers of deaths. Today would be shocked if something like this happened and it was not studied.

The affect of this event was both long term and immediate. Portugal was rebuilt and reformed. The Jesuit Priests were exiled in 1759, although the decision was reversed later. This did lead to Portugal becoming the first country in Europe to build a secular education system. We are still feeling the effects of this tremor.

Posted by LaustenN at 6:04 PM No comments: