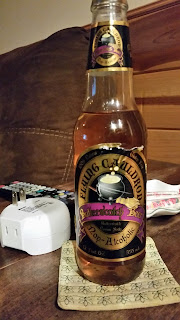 Just relaxing with a little TV and having a beer. It's kinda like having a beer while you have a butterscotch candy in your mouth. I found this at the Fizzy Water store on Canal Park. It's kinda cheating to find craft sodas there since that's all they have. Well, they have some candy too. It's a dentist's nightmare, or boat payment. Anyway, I found this one on the low sugar shelf. Plenty of butterscotch flavor but not too sweet. The "beer" part is more like root beer. It really doesn't qualify as a non-alcoholic drink. You could call anything non-alcoholic if this passes.

Not sure I'd have this one again.
Posted by LaustenN at 2:33 PM No comments:

We are all related

Christmas is a time when generations come together. They get packed into one room and inevitably one of the older ones, perhaps the oldest one, has some story to tell or something they want to show one of the younger ones. This has all the potential for being a completely useless interaction, something that is suffered through, not just by the two who are actually participating in it but even those around them, those who have to hear it. There is a way to make this worthwhile, and, yes, I’m writing a story about how to save Christmas. 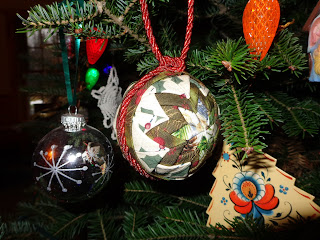 This year, my wife made ornaments. She learned how to do it with friends. It involved a Styrofoam ball and fabric and pins and it’s very intricate and she is very precise and she loves doing it and she loves doing it well. She sent them off to my aunts and uncles and to hers’ and more importantly to the children and grandchildren of some of those relations. Hopefully they see the significance of them, but odds are they won’t.  And hopefully we get that chance one day to visit them during the holidays and that ornament will be out and we’ll talk about it, rather than the weather or whatever horrible news is going on.

And somewhere in there, some tiny bit of wisdom will be shared. It will sound trite or canned at the time, but many Christmases later, that young person will be the old one, and they’ll be worried about that younger generation and how they don’t look things up on the internet anymore, or that they don’t know what it took to end poverty and how they don’t appreciate it and they’ll think “kids today…”, and they’ll try to figure out a story to tell and they won’t have one that is any better than the one about making Christmas ornaments.

It might be a different story about something else, about making soup and how all the ingredients mix to make it just right or something. It doesn’t matter because you can’t explain being old. You can’t explain what it means to earn your gray hair or your wrinkled skin. What matters is that those feelings, those intentions, were put into the project, the recipe or the story. You don’t need to know the whole story to see when that kind of care has gone into making something.

You’re going to get that gray hair and wrinkled skin either way, so you might as well earn it, but you’re not going to know what goes into getting them until you have them. Sorry, young people, your role in this is not that exciting. You get to do all those exciting things that young people do together, those things that would end up with a broken hip for us. Listening to grandma on Christmas is probably not on the top of your list. So, here’s the secret, that grandma had a whole bunch of Christmases before you were even born.

So, when she’s showing you something that doesn’t seem that interesting and telling that lame story, she’s looking at you and she doesn’t just see your nose and your hair. She sees your mother’s face and hears your uncle’s voice coming from you and she remembers a smell from some far off kitchen and hears an owl in the woods and she sees a long horizon across a windswept plain. It’s all related. We are all related. The only way to discover that is to live long enough and be conscious enough and to notice it while it’s happening. You can watch a movie, or sit there with your headphones on listening to music, but those are storytellers too and they are trying to get out the same kind of messages. For me, there is no better way to hear a story than from someone close to you.
Posted by LaustenN at 10:51 AM No comments:

This is a short speech I gave to the Lake Superior Freethinkers this morning. It's something we do before the main presentation. We call it the reflection.

I'm sure you all have been watching the news lately. We have Syrian refugees and terrorist bombings around the world and our own wonderful political reactions to it here at home. In looking for to help sort this out, I've found some impressive voices from people who call themselves progressive Muslims. Progressive religious voices fascinate me because I don't understand how they remain true to their specific religion while speaking so well on universal human rights. One of them is Irshad Manji. I watched her in an interview and one minute she was speaking about her right to openly identify herself as a lesbian and in the next she was expressing her love for Allah and her voice was cracking and her hand went to her heart.

What does this devoutly religious person have, to tell us, the people in this room? I also saw her respond to a conservative Imam, who asked her if she thought the Muslim community should change it's stance on gays. Her answer was "no", but she would like it if they stopped saying gay people should be killed. And she has the knowledge of the Quran to back up her stance on that. To bridge these seemingly unbridgeable groups, she placed the value of coexistence, that is, not killing each other, over a requirement that all Muslims completely accept her.

This is her version of freedom of religion.  In this country, we have freedom of expression, which includes the freedom to express the idea that religion should be eliminated. Or, short of that, the tax advantages it enjoys should be eliminated or closer scrutiny should be given to how children are taught religion. It includes the freedom to make jokes about religion. But people still have the right to call themselves whatever they want and claim their holy book means whatever they want it to. We're all free to do that, as long as it doesn't come into conflict with any other laws and rights.

Keeping this in mind is to everyone’s advantage. If you live by this rule, it is reasonable to ask others to do the same. You can challenge those who say, they are doing their religion “correctly” but those terrorists or those skin-heads are doing it wrong. This usually leads down a path where you find their "correct" version also has something you consider a human rights violation. But, you can avoid all that religious justification and go straight to the values of not harming innocent people.

This approach also opens us up to partner with people who are using ways of thinking we would normally not consider valid or reasonable. The author I mentioned has the challenge of being a Muslim in a Western country and within that she has the challenge of being a gay person within that community. For her, it is a double oppression. It is her very unique seemingly incompatible circumstances that fostered her ability to identify an approach to bridging them.She looked to the underlying value, what makes us human, not simply what makes her a Muslim.

I call these underlying values "liberal", but I'm not talking about "liberal" as in "voting for Bernie Sanders", I'm talking about the idea of liberal that grew out of the Peace treaties after the wars between the Protestants and Catholics, when the power of the Pope over most of Europe was taken away and people were allowed to think for themselves about what was right and wrong without the threat of a torture chamber. One of those values is recognizing when people are marginalized, discriminated against and oppressed. If you are in a position to do something about that, it benefits you and everyone else to do something. When you look at issues from that perspective, I believe you will find that people who call themselves Muslims or Christians and even people who call themselves Conservative, see the world in much the same way.

Now, I'd like to end on that high note, but I want to be clear that my rose colored glasses are off. I realize there are very few religious people who are reaching out to the rest of the world in the way I just described. I'm not suggesting that people here simply need to turn around and recognize that the world is full of tolerant, pluralistic, LGBTQ organizing regular folks who just happen to also like football and using hunting rifles in a responsible manner. I'm aware of how the world works. I'm suggesting the promotion of tolerance and pluralism is our responsibility and that it is work, work that requires self-reflection as much as it requires speaking up about what others are doing.

Posted by LaustenN at 7:06 PM No comments: