Or skip ahead to the next one.

I covered some of the early milestones in the discovery ofthe modern scientific method in my earlier timeline and blogs, so I’m going to skip over to the Iberian Peninsula for the next chapter. History and science are not everybody’s favorite subjects but I blame text books for that, as well as limitations put on teachers to keep them from being too controversial. For school boards and principles, it is easier to deal with, and by that I mean suppress, a few wild card teachers than it is to deal with the variety of parental concerns that arise when you stray from a narrow, boring, middle of the road, watered down version of history.

That’s unfortunate, because there are some juicy stories out there. The one I’ll relate here looks at just why we call Spain, Spain. The “Iberian Peninsula” is more generic, although even that name has Greek roots.

The Iberian Peninsula was inhabited before Rome or Greece but was eventually part of that empire. It was influenced by the Celts, the Phoenicains and the Tartessians. It also came under Germanic control for a while, which included Christians. In 711 CE, some Muslims started moving in. 781 years later it would be “re-conquered”. This has come to be known as The Reconquista, mainly because they were the last ones to win and the culture that won has more or less survived.

One area that held off the influence of the Muslims for a long time was Murcia. The region had been built in the early part of the 9th century. At that time, it was inhabited by two rival tribes at the time, the Yemenies and the Midaries. One day, a Yemeni decided to help himself to the some grapes growing along the water’s edge. The grapes were owned by a Midare who saw him and was insulted by his transgression. They fought and the Yemeni was killed and a war followed.

War is bad for commerce, so troops were sent from Cordoba to keep the peace. While the rest of the continent wallowed in tribal wars between feudal kingdoms, Cordoba was a clean city with beautiful mosques and a well fed populous, surrounded by well managed agriculture. One of its strengths was tolerance of religious practices. While the crusades were creating rivers of blood in Jerusalem, Jews, Christians and Muslims worked together in Spain.

But Spain was not yet “Spain”. Under Islamic rule it was called Al-Andalus and it continued to be a collection of kingdoms. Under the rule of Islam, these were called Taifa Kingdoms. Muhammad Ibn Mardaniś rose to be its King in 1147. He came from a Hispanic family but converted to Islam. His troops were also of mixed heritage and with them he expanded his Kingdom into Valencia. He successfully defended Murcia from the advances of the new family of Muslim conquerors, the Almoravids, until his death in 1172. His was the last Kingdom to hold off their advances. His sons gave in and became a vassal kingdom of these Moorish conquerors.

The Almoravids did not care for the lack of piety shown by these multi-cultural kingdoms and attempted to regulate art and architecture. However looking at mosques in Algiers and Fez today, it seems that some of that art did eventually influence them. When the Almohads took over, mosques, mansions and palaces were built throughout the empire. The 100 meter minaret in Giralda still stands in Seville. The Alhambra in Cordoba also survived the destructive forces of the Reconquista. It remains as an iconic image of Moorish influence on the area. 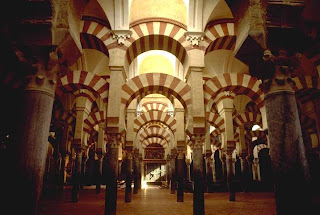 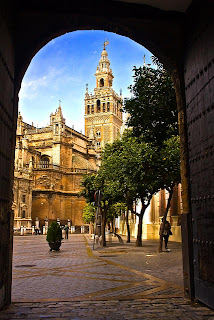 But their rule became unpopular. Perhaps it was their intolerance for the Jewish and Christian communities that weakened them. Either way, they never could expand into the Christian nations to the North. The Kingdoms of Aragon, Castile, Leon and Portugal expanded and became Christian Kingdoms. To understand the battle to come, I’ll take a look at those kingdoms in more detail next week.
Posted by LaustenN at 12:50 PM No comments:

The Common Era - The Fundamentals

This is the beginning of a series, click here to move on the next one.

You can continue to follow my commentary on Tony Jones’ series on “Questions that Haunt Christians” if you’d like, although I understand if you don’t want to continue to torture yourself with that. I’m finally getting back to my historical research on the beginnings of science. I’m finding more and more interesting tails from the 13th century and surrounding eras about how knowledge moved around the Medieval world and was claimed by various political and religious forces. Each one wants to take credit for the work of a few courageous individuals who crossed political and religious barriers to discover what we all needed to advance ourselves as a species.

Today, the major force against science is fundamentalism. The word is often associated with Muslims but also has Christian roots. It was a Christian document from the turn of that last century that was titled “The Fundamentals”. It was, as the word implies, an examination of what essential beliefs were required to define an individual as a Christian. It has since come to be associated with more than defining that for yourself, but forcing it on others, or at least claiming that those who don’t believe like you will suffer punishment. The most problematic version of fundamentalism is when people who are alive now believe it is their duty to enforce those beliefs and do the punishing.

For Christianity, although it was not called “fundamentalism”, this began a long time ago.

We can see by writings in the Bible that Christianity had very humble roots. It was denigrated by the government and the religious establishment of the day. That is the basis of the crucifixion story. You don’t need to accept any of the Bible as historically accurate to verify this. There are just a few references to the Christian movement outside of the Bible. Documents of the early church are scant. The actual authorship of the gospels and the dates of their writing are in dispute. Discussions of this by Christians can be found easily, even in the footnotes of some study Bibles.

Christianity was practiced by a variety of sects for 300 years after the historical time of Christ. This was a problem for an emperor. Emperors don’t like fighting among groups in their kingdoms. Especially when they decide that they want to be a member of one of those groups. This is the reason Emperor Constantine called a council of those sects to work it out. It was called the First Council of Nicea. Christians don’t talk about it much. New Age writers like to make up all sorts of things about it. Its direct impact can be argued, but it can’t be argued that the Catholic Church fared much better from then on.

When a group goes from being illegal to an official group of a powerful government, that’s gotta be a good thing for them. This was not just some symbolic statement either. Constantine was declared the enforcer of the doctrine. He continued to support traditional Roman temples for a while, but eventually he pillaged them and tore them down. He used public money to copy Bibles. He rebuilt Jerusalem with a focus on the Christian aspects.

But it was more than just support of a religion that he loved. The word “catholic” means “universal” and that is the faith Constantine wanted, one church, with him at the top. Constantine mastered the concept of combining Church and State. Ceremony and costume surrounded him. He was “God’s agent on Earth” and an audience with him was the next best thing to talking to God. As he fomented civil wars and conquered kingdoms he set military and religious leaders in charge with the lines of authority between the two blurred.

Such a power hungry system does not end with the death of its leader. Constantine’s sons continued to battle, including with each other. Both died in their fight. Constantine’s nephew Julian assumed the throne and was assassinated by the Persians. This only deepened the resolve to fight. At the end of the 4th century, laws prohibiting non-Christian beliefs were enacted. Heresy was equal to treason, a capital offense. Temples were destroyed, libraries were burned, and philosophers were murdered.

Many people fled. Many to the East, to kingdoms of Persia and Arabia.Tribal warfare existed there too, but religious persecution on the order of Constantinople did not. According to legend, Muhammad was born in 570 CE. He initially gained fame as a diplomat between the warring tribes. He eventually became a leader of an army, and leaders that followed continued to conquer and expand the Islamic nation.

What they didn’t do was to expel people from their nation based on religion. That would come much later. They integrated with those cultures. In Northern Africa, people weren’t too happy with the leaders they had, so being conquered by someone who let you practice your traditions was not so bad.

They did tax people they conquered. They did give Muslims advantages in politics. Caliphs had to be Muslims. However merchants, teachers, philosophers, researchers of all kinds could draw from any culture or tradition they cared to. In fact it was encouraged. This allowed them to build much cleaner cities and better feed their citizens than the kingdoms in Europe. They brought paper making from the Far East and disseminated their knowledge quickly across a vast empire.

In Europe, we call this time the Dark Ages while the Islamic world was experiencing a Golden Age.

Empires don’t last forever. In the east, a new form of the Muslim religion began to take hold in the universities and the power structures were weakened. Eventually in 1263, Baghdad was sacked by the Mongols. In the west, African tribes, who had converted to Islam, were trying to consolidate the smaller kingdoms in the Iberian peninsula. As they did, they instituted laws that required Jews and Christians to convert to Islam. This was the beginning of fundamentalism in the Muslim world, and where our story will begin, next week.
Posted by LaustenN at 8:50 AM No comments: