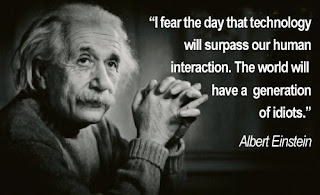 Checking snopes.com, this can’t be verified as something Albert really said, but I understand the sentiment, even though it is poorly worded. First off, every generation looks at the next one coming up and says they are idiots. That’s been going on for generations. It can be found it writings from ancient Greece. I don’t think we have actually been getting stupider for 3,000 years.

One way to look at it is the older generation just doesn’t understand the younger. They have different technology, which doesn’t make sense to them. And, when you grow up with something already in place, like a phone, or a TV, it is hard to appreciate all that went into creating it. Another way to look at it is, at some points in history, we do regress. There are golden ages and there are dark ages.

I’ve been reading lots of Richard Carrier lately. He calls these phenomena, science1 and science2. Science1 are those times and places where new inventions are popping up all over and great progress is made in knowledge and health. Science2 are the times when people just use those inventions without making much if any improvements in them. We could be entering a science2 phase or we could be already there.

In the 1950’s, we cured polio, now we make Viagra. In the 1960’s we had a green revolution and fed the multitudes in Asia, but we still have cycles of famine in Africa because we didn’t finish the job and figure out how to apply those lessons in different climates. 1969 we landed on the moon and since then we have passed the dates of major science fiction movies that predicted moon bases, space stations and commercial travel to space without achieving those visions.

Some of my previous posts mistook the science2 that was going on in the Islamic world as if it were science1. They may have advanced the art of the astrolabe in that time, but they did not advance the science of it. They may have rediscovered some of the math about calculating the size of the earth and made excellent use of Greek knowledge of medicine, but very little can be counted as advances. They should be acknowledged for keeping science alive, but credit for inventions should only be given where it is due.

We still live in a time with more people dedicated to scientific discovery than ever before, so I don’t really believe we are sliding back toward some dystopia. At the same time, we have people who are using the new technology to promote the ideas that intellectualism is harmful and that only bad can come from scientific progress. Because the older generation gave us a world of instant global communication, they can be quite successful at that.
Posted by LaustenN at 7:08 AM No comments:


I was in an online, ummm, discussion, about whether or not Jesus actually existed. Such discussions require a certain amount of googling. In my travels I stumbled on an iTunes course titled, “The Historical  Jesus”. It turned out to be pretty good. You can hear the student’s voices asking questions. There was at least one Middle Eastern woman and an older guy, possibly from Texas, plus a few more. I would have loved to go out for a beer after that class.

The teacher has been around for a while. He talks of knowing about the new archaeological and textual evidence back in the 1960’s. Much of that went underground somewhere in the decades to follow. Some of it resurfaced with “The Jesus Seminar”, but much of it is still ignored. I only listened to the lectures, but here is the reading list, including the professors own work, free online.

By the way, Thomas Sheehan, the professor, is Catholic born, raised and still attending. He would often repeat that he doesn’t intend to challenge anyone’s faith, or change anyone’s mind on that topic. He does note that if you approach Jesus as he does, through his course, you may find yourself challenged, but that is not his intention. He would occasionally let his views on religion be known, they were more about people working together to find community for themselves, within God’s creation, but not as a way to win favor or avoid punishment. He would also argue that this was the message that Jesus, who he calls Yeshua, his Aramaic name, actually taught.

If you have some different ideas about what Jesus/Yeshua taught, you should take that up with Mr. Sheehan. He can explain where the theology that you espouse originated. Much of it came well after the death of Yeshua. He would argue that Yeshua did not see himself as the vessel of the message, or as divine. But I don’t want to get into those details. They interested me once, but no longer hold me for more than a few minutes.

What his course builds up to is the moments when the preaching of Yeshua was scrambled and turned into something more like history. Today the people who try to treat the Bible like history are called fundamentalists. At the time, they were people who had a message of their own, a political message, and were using the oral history of Yeshua to tell their story. They mixed the parables with the liturgy and said that these things; the virgin birth, the resurrection, actually did happen.

This does not trouble him. He understands that it was how it was done back in the latter days of the Roman Empire. What troubles him is that we have spent a few hundred years unraveling this, we have been lucky to recover ancient papyrus at Nag Hamadi, we have people who dedicate their lives to learning languages that are no longer spoken, and yet, we still have preachers telling the stories as if they are St. Augustine.

I have a study Bible that clearly states that the last chapter of the book of Mark was tacked on by later editors. They had to do it to harmonize it with the other gospels. Mark leaves you with an empty tomb and suggests you go back to your homes and live a holy life like Jesus. That is how you will bring the Kingdom. It makes for terrible liturgy on Easter Sunday. By the way, this is the New International Version, not some agnostic’s guidebook to Christianity. These are facts only disputed by those who refuse to look at the evidence.

For Sheehan, much of the evidence is “source” analysis; what were the authors of the gospels looking at, what were they reading and hearing. He also uses “literary” analysis; what type of writing were they doing and what message did they intend to communicate. So he looks at the book of John that has Thomas being an unbeliever. Now that we have recovered the gospel of Thomas, one that didn’t make into the canon, we can see how different it is, and guess that the author of John was giving a snub to the community of Thomas. Sheehan relies on the “textual” analysis from the people who translate the words, assemble the fragments and comment on the authenticity of the source documents.

This analysis does not end with the writing of the original documents. As he traces the formation of the early church, he shows how the Easter story, as presented in John, is “read back into” Matthew and Luke, then that reading is gathered together and read back into Mark. This proved difficult and thus the adding of the extra chapter. All of that is in turn read into the few comments about resurrection found in Paul’s letters. When St. Jerome translates the Greek into Latin he takes subtler meanings of words about waking up from sleep or being lifted up and uses the Latin for “resurrection”. From then on, we have a fabricated historical account of what happened in those three days after Yeshua died.

Sheehan steps out of his professor role at this point, about the middle of the 9th class, and says, this is, “…the stupidity, frankly, of it all.” And he notes, it has given “the village atheist” all the ammunition they need to say it is stupid. He continues,
“And the fact that it is performed by people with doctorates and people who have the authority to preach from pulpits, doesn’t make it any less ignorant. If you went to a doctor and she didn’t know about the latest treatments for cancer, you’d probably find another doctor. And if she treated you with information about cancer from 10 years ago, you would sue her for malpractice. But preachers get a pass. Even though they are dealing with issues that concern the existential commitment of people’s lives, ‘does my life have meaning, will I end up in hell if I do this, that or the other’, even though they advise on those based upon their alleged knowledge of scripture. They get away with it.”


And the people in the pews let them.

If you’re interested, the course is in iTunesU. It is from Stanford University, 2007, given by Thomas Sheehan. That should be enough to find it if you have iTunes. Or try this link.


Glad you all made it past the end of the Mayan calendar. Let’s hope those who believe that it is the dawn of a better world are right. I wasn’t worried about the world ending so much as I was that it would continue more or less how it has for the past few decades.

I put books at the top of my Christmas list again this year, although a very different list from last year’s. Last year was mostly theology. This year covers philosophy, psychology and history. There is one “A”-theology book in there, The Christian Delusion, a collection of essays edited by John Loftus. I bought this one at the suggestion of Richard Carrier, a historian whom I have read and heard lecture. I emailed him and asked for comments on my recent blogging, and he wrote back. It was not really flattering, but that is his style, and I took it as constructive.

He recommended I read his entry in this book. So there may be corrections coming soon. In his essay, he covers earlier history of science than I do, but notes that many of the claims made by Christians and Muslims about discoveries of science were already done by the Greeks. So although not directly addressing the Islamic Golden Age as I did, his comments are quite relevant.

381 AD by Freedman, a history of the shift into monotheistic governing
The Republican Brain by Mooney, recent science on how conservatives think
Answers for Aristotle by Pagilucci, I’m not sure exactly what that one is about, but Aristotle interests me and I wanted to find out more about the author
The Structure of Scientific Revolution by Kuhn, this is an old one, but I see it referenced and recommended often.

Hard to say exactly what this year will bring.
Posted by LaustenN at 10:26 AM No comments: