Behold, I bring you tidings of great joy 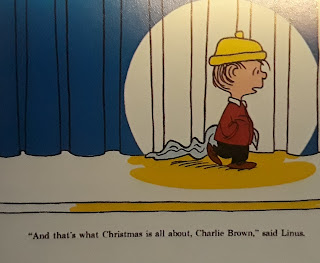 We all know the verse that Linus recites at the climax of Peanuts Christmas. Charlie Brown is questioning what Christmas is all about. Linus ends his reading with “Peace on earth and goodwill toward men.” That’s great, and by 1965 when that was made, most Christians throughout the world agreed this is the meaning of Christmas. Trouble is, this was written before there was the modern version of Christmas and it originally said, "Peace on earth for those whom God likes." You need to understand a bunch of Greek and Latin to understand that, but simply, you drop one Greek letter and you have to also change the whole subject/object stuff of the sentence and that’s what you get.

I heard this a few times, and it just sort of passed by me. It’s an interesting artifact of history from a time when there were no copy machines. A simple mistake. No real harm done. Except, when you start digging through the various copies throughout history, it was not a mistake at all, it was quite deliberate. This didn’t just happen in the third century and now, with better tools of historiography, we are discovering it. This has been known throughout the history of Christianity by the few people who had control of these books. Just like now, where we have neighbors who are happy to break bread at their ecumenical gatherings and multi-denominational dinners and also fundamentalists who want holy war, there were people who said they wanted peace in the world and others who knew their scripture said only some of them should see that peace. Sometimes it was the same people, saying one thing while knowing the other.

The difference between now and then is the balance of power. For the most part, those who truly believe in tolerance and peace are in power. But every day we see signs that it is still a struggle. Mainstream religion may appear to hold these values, but the facts of these discrepancies in our manuscripts raises some questions. If you accept the expert opinion on this, if you accept that people who spend their days pouring over these fragments of paper and studying the ancient languages actually got it right, then why don’t we change the Bibles? That is, correct them to what they originally were. Even if we don’t change the Bibles, why don’t preachers tell us this is only what modern people believe, not the people who first wrote the words. Those were the people who were closest to the events that inspired the words. If we are saying that we should listen to what they say, that their ancient wisdom has value, why shouldn’t we be listening to what they really said?

There are a few ways to go from here. We could believe that peace should be for only a select group. We can believe that something from outside of the physical universe somehow guided these hands and created these words on paper once, then had another hand erase it or misspell it and somehow that series of changes was slowly revealing this truth to us. We can believe that the original authors had some special vision, maybe divinely inspired or maybe just some special set of circumstances that they observed that helped them tap into this wisdom. Or, we can believe we are creatures with the ability to reflect on the past and future, trying to figure out what to make of our existence on this lonely planet. There may be millions of other planets like ours, but the universe is rather large, and we can calculate the odds of contacting one of those other planets, and they aren’t good. We might want to figure out how to get along with just each other for the time being.

To put it simply, we need to say that whoever wrote the gospel according Luke, was wrong. And when I say “we”, I mean it needs to come from the people who make a living interpreting this book. Those authors were wrong on this account, and they were wrong about some of the other things they said. We have fought wars based on religion. That includes Christians fighting over the meaning of words like these. We have had Kings anointed by gods and we have died for them. We have believed that the world could unite under one set of laws, inspired by some spirit, and experience a thousand years of joy. We were wrong.

We have found that allowing for borders and respecting the sovereignty of others is a way to deal with our differences. We found we have universal values despite theological differences and tried to create international laws, and sometimes we even got it right. Sometimes, nations put aside their differences to keep one nation from getting out of control and imposing its will on weaker people. It’s rarely pretty, but we muddle towards a world where we talk more than fight.

Instead of looking to something that was said hundreds or thousands of years ago, we look to what can be demonstrated by our senses. We extend our senses with tools created by an understanding of basic principles that have been tested over and over again. We know the sun has come up every day regardless of what sacrifices were made, so we don’t make ritual sacrifices anymore. We know the earth compressed the organic material from millions of years ago to give us fuel to light our universities so people can work late into the night curing what was once called a curse. To make that happen, we also know that we need to have some degree of peace with the people who are sitting on a lot of that organic material. The same goes for copper and materials needed to create more sustainable energy infrastructure. What is important is, so far, we just have this one planet.

You can accept what I’m saying or not. You also have the tools to research this yourself. The manuscripts with these words on them have been cataloged, numbered, digitized and are available to you free right now. The 1% of today only have power over us because we don’t do this work. The 1% in the time of Luke had a much easier time of it because they were the only ones who could read at all. The fact that I learned these things is the result of the accumulated knowledge I mentioned above and the cooperation of people across borders. The internet began as a way for scholars to share their work. It has become a way to avoid the lines during the Christmas rush. How it will be used tomorrow is our choice.

Posted by LaustenN at 8:22 AM No comments: