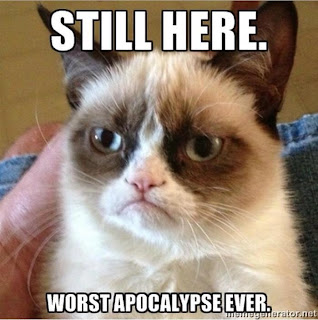 Posted by LaustenN at 9:56 AM No comments:

I found an interesting piece of sarcasm recently.  I am trying to cut back on sarcasm, too often it is only funny to myself, so I will let you find it yourself.  Consider it a quest.  When I found it, it was the top customer review for the book “The Secret” in hardcover on amazon.com.  Over 6,000 people found it useful, so I assume it will stay on top for a while.  I wasn’t planning on buying the book myself, but I was looking for some insight into what it was about.  I have been on my own quest for the secret most of my life and I am always fascinated by the latest popular claim to know it.


I’ll save you the $17.49 and tell you that there is no secret, and the paradox is, that is the secret.  The book frames it along the lines of attracting good things by having thoughts, but that’s just another way of saying that you get out of life what you put into it.  You might also want to look at the companion DVD about Abraham, some kind of channelled spirit that helped write the book.  That is the point I knew I was not going to put anything in my cart.


I don’t expect that your life will change, or that you will experience enlightment from what I just said, but I have read the so-called secrets of many cultures and philosophers throughout history, and that’s pretty much it.  I have never personally created that experience for someone else, but I would suggest some much better sources than this one if it’s what you are looking for.  In the end it is a personal experience.  You may be wondering why I’m bothering to write this.  The reason is, I find books like “The Secret” not just a waste of $17.49, but harmful.  They go from something that can be dismissed to soemthing dangerous when they explain how the secret works, then go on to point out what is wrong with you that keeps the secret from working.


I have had my own ah-ha experiences.  Those moments when everything came together, made sense, and I knew what was next for me.  Usually any attempt to write it down or explain it was futile.  Sometimes, I realized after a while that I wasn’t so sure.  When I was nearing the end of my college years, I went for an early morning walk in a park near my home.  I was in a hollow and I stopped and looked up and saw the most beautiful cascade of water coming down one side of the hollow, it dripped off the moss and skimmed around the rocks. It was caught by the filtered sunlight giving it the look of gold and copper and diamonds.  I was mesmerized.  I saw my whole life before me, I knew my future mission and felt the confidence of having done everything I needed to in the past.  I knew everything and at the same time knew that I knew nothing.  It felt as if the water in my body emptied out of me and this water was filling me again.  My life was over, and it was just starting.


I would like to take you there and give you that experience, but I’m afraid it wouldn’t do much good.  I have been back myself and it has never looked like that or felt like that again.  It’s really more of a drainage ditch coming off of a golf course than it is a hollow.  If I could simply tell you the location, and have it work for you, I would gladly do it.  To discover your own mission, you need to go on your own quest.


What is unfortunate about books like “The Secret” is that they actually do work for some.  If you are unfamiliar with the concepts in the book, they seem very logical, and they are.  If you apply them, you might be successful, and the author deserves some credit for that.  If you have some success, then some failure, you might come back to that author looking for the DVD version, or the new workbook to refresh you, and that’s when it gets dangerous.  From the reviews, it appears this author is aware of that phenomenon, and plays on it very well.


I don’t know if there is a name for this phenomenon, but I suspect there is, possibly in psychology.  When someone has an experience like the one I described, one that is difficult to explain, it is natural to associate it with a place, or perhaps a book.  For me, that little crack in the limestone with the cascading water is sacred, for others that place is just a parking spot, or a place where they lost their golf ball.  There was something there that tipped me into that sacred space, but I would have never got there without a lot of friends, a lot of effort, and many failures.


Before you go off on a quest of your own, I hope I haven’t made it sound like it has to be a big struggle.  My college years were actually pretty easy.  There is no one way to go about it, and it doesn’t even require leaving home, although living in your parent’s basement until your 30 may not be the best place to start.  Important factors to include are a desire to learn, considering all viewpoints, pushing your limits, nothing shocking here I hope.  Some reading may be involved, but please skip books like “The Secret”.  I highly recommend “Siddhartha” by Herman Hesse.  For younger readers “The Alchemist: A Fable About Following Your Dream” by Paulo Coelho is quite good.


I hope no one is getting from this that I am recommending that each one of you needs to pull yourself by your own bootstraps and get out and figure this out for yourself.  We need groups of people watching out for each other and helping us to go beyond what we think our limitations are, and sometimes telling us to pull back.  If you have a group like that organized just because you live near each other, then you are lucky.  If you are doing well maybe it’s you who should start the organizing and find someone who needs a little help.  If you want to get together with people who have interest in the same book you do, that’s great.


Some of you may be seeing some similarities with something else and I want to address that.  Some of you may want to quit reading at this point, I understand.  I recently came across another piece on the Internet, actually it was on You-Tube.  It started very slow, with classical music, using typed words, no voice.  It said that it was about to tell me something that would change my life.  It said I might experience feelings of great peace as I read the words that were coming.  Many of you would have moved on to the American Idol or UFO video, but this is my hobby.  It took a few more minutes, but eventually it told the story of Christ’s death and resurrection.  My only experience was disappointment.


The parallels here are that many people have had positive experiences with the New Testament.  Many of them organize groups based on those books, or join existing groups.  Some of them turn to that book whenever something goes wrong, looking for an answer.  Some of them want to convince everybody that this book is the only one with the right answer.  Some of them figure out that they can make a lot of money off the previous two groups just mentioned.  Some people think going to see the places referenced in the Bible is what they need.  Some claim to have seen visions of people from the Bible.


The person who made the You-Tube felt that I only needed to hear the story and I would get the same experience they had.  I have never known that to work.  Any conversion story I have heard always began with a story of falling deep into a hole of degradation or egocentrism, or addiction to money.  Only then do they see the statue of the Virgin Mary crying or something else to shake them out of it.  There are of course many other paths to the same conclusion that are less dramatic.


Despite all that, I recommend leaving the Bible on your reading list.  I have heard a lot of bad things said about religion, but I have never heard someone complain about a criminal who found Jesus while in prison and now has a steady job and healthy children.  Unless of course his job involved coming to your house and trying to get you saved.  The difference between “The Secret” and the Bible is that it is only the interpreters that want to frighten you into putting their book above others.

A lot of people believe that the Bible tells them that they must get other people to believe.  I haven’t found that part.  I found something that says it’s a good idea to share the source of that which has helped you.  So, my work is done.  A lot of people believe that the Bible tells them if they don’t believe it, bad things will happen to them.  I found some things about seeking good things and good things will come to you, but also some stories about how that doesn’t always work out, and what’s really important is that you keep seeking the truth and living that truth. A lot of people believe that you have to believe all the miracles in the Bible or you don’t really have faith.  I can’t find that anywhere, in fact it seems like you need the faith first for the miracles to happen, or if you are lucky enough to witness a miracle that will help you get some faith.


A lot of people believe that God has a certain name and a definite schedule and you had better get on that schedule.


There is a preacher on TV who reads from the Bible and interprets as he reads.  He talks about the Hebrew translations and the meaning words had in the context of thousands of years ago.  Every now and then he stops and tilts the Bible up to the camera and says, “the answer is in here, if you just read it, have you read it?”  I have read it, and I have come up with much different answers from him, and I have read works by Bishops, priests and scholars that agree with me.  The TV preacher talks as if he wants me to study for myself and form my own conclusions but if I told him about those answers, I’m sure he would say, “well, you need to read it again”.
Posted by LaustenN at 11:31 AM No comments: