I came across this meme the other day while looking for something else. It's from a local Lutheran church. It's a nice church. I have friends there. They do good things. I don't know who put this up or how many of them would just agree to it without thinking. Hopefully not too many.

I couldn't confirm the exact quote, but it does paraphrase a work by Augustine, The Confessions. Augustine was born after Christianity was made legal by Constantine and contributed greatly to the work of trying to figure out what St. Paul meant and what the gospels were trying to say. Things like the Trinity were still being hotly debated at the time. Unfortunately, the people who won the debates were from some of the worst, most extreme forms of Christianity. The ones we would today call The Fundamentalists. 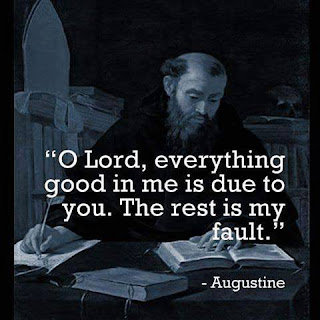 They wouldn't have called themselves fundamentalists, because they had not yet decided on what the fundamentals were. Today we define fundamentalists by those who call the Bible the literal word of God and consider Jesus to have been a real person, the son of God, who actually died and bodily resurrected . Back then, they were still debating which writings belonged in the Bible and if Jesus was a man, fully human and fully God, a spirit, a man who was born then possessed by the holy spirit, or what. The difference then was, people on all sides of those debates had some degree of power and influence. Today, suggesting that Jesus was not a physical human, walking around and talking to people, will get you laughed at in most circles, even outside of church.

So, why am I bringing this up? Sure, it's from 16 centuries ago. But here it is on a modern "wall". It's posted by a church that was founded by a guy who protested against a church that was corrupt. The Catholic Church claims to have it's roots in communities founded by all those writers from the first few centuries that Augustine was debating about. Those communities were protesting the corruption in the Roman Jewish community in their time. Churches today will often claim that they are challenging the world order, that they are uncovering the corruption of power, that they are symbolically turning over the tables of the money lenders in the Temple. And sometimes they do. But they also will tell you that you are not good.

Whatever other traditions churches might have, the legacy of them telling you that you are not good enough for God has endured throughout all of them. When you do that, when you convince people that there is something they don't know, and they need to keep coming back to you to figure out what it is, you can get them to do anything. In the case of the late 4th century Christians, they got people to burn the scripture they didn't like, tear down the churches that didn't teach the right brand of Jesus, and to do the same to people who sat in the wrong place and read the wrong books or said the wrong things.

This is not some alternate history. It is well known. It is the beginning of what came to be known as "The Dark Ages". I'm not blaming the Christians for this. The Romans started their own downfall when they kicked out Aristotle and gave power back to corrupt rulers instead of promoting democracy. Something would have replaced that, and we could have done worse, but we could have done a lot better.

After about a thousand years, we did start doing better. Instead of reading interpretations to people, we taught them to read. We didn't treat people like slaves, we encouraged each other to work for each other. We found out genius and inspiration was everywhere if you just gave it room to grow. Seems pretty obvious now, but it was a struggle to get where we are. People like Susan B Anthohy, Rosa Parks, Ghandi, and Ayaan Hirsi Ali continue that struggle today.

All of them fought using reason. They read, understood and developed philosophy that valued human dignity and human feelings. They didn't try to figure out some logic that explained why a God who claimed to be ultimately good could allow for evil in the world. They acknowledged that there is good and evil and they tried to find ways to deal with it. They didn't provide simple answers. They asked for the right to ask the question. They claimed the right to participate. If someone claimed authority by referring to someone from the 4th century who said they weren't good enough, that they could never measure up to some ultimate authority, they questioned that authority. It's the basis for the world of freedom we have today.

Keep what's good from religion if you can find it, but get rid of stuff like this.


I found out about this the other day while listening to Laura Erickson’s “For the Birds” on the radio. It has nothing to do with birds, but Laura ventures into philosophy now and again. This is what the internet and modern communication is supposed to do. It connects us to the wisdom from 600 years ago and reminds us of what is important to all human life.

Actually, the fear is not of tomorrow but of the day after, and that is its danger — for the fear of death can keep us from living.

The essay was written in 1951 and begins with a reference to a book written as people were awakening from the nightmare of the Black Death and beginning to experience the Renaissance. It talks about what to do in the face of such destruction and relates it to the fear of the time when it was written, nuclear annihilation. In the 14th century, people hid out in abandoned mines. In the 20th century, they cached weapons and fuel and built compounds in the wilderness in Oregon. For some today, they just stay home and don’t engage with the rest of the world. All of these are choosing death while they are still alive.

If you knew you were to die day after tomorrow, what would you do tomorrow? Only one answer has ever been sensible: Just what I would do if I did not know — go to the office, take the children to the park, go on with the job, get married, buy the house, have a baby.


People still respond by hiding and isolating themselves. If anything, we’ve just expanded what we fear. We fear the modern medicine and modern farming that was supposed to fix the problems of disease and starvation. We fear the government that was created in response to unchecked monarchies. We fear we are being lied to by the institutions that are supposed to offer us access to information so we stop trying to figure what is true. We build virtual walls by shutting out the voices of people not like us and by ignoring our neighbors.

This may all seem like a downer, but DeVoto offers an answer, perhaps “the answer”, an answer that is repeated throughout history in stories and poetry.

The link is to Laura’s blog. It expands on the quotes I’ve put here. It further links to the complete article by Bernard DeVoto.