I have been thinking about sacrifice lately. America is in a war where young people sacrifice themselves everyday yet there doesn’t seem to be much sacrificing going on back at home, unless someone close to you is in the war. There seems to be more concern about waist lines or the latest American Idol.

Perhaps we have lost our understanding of sacrifice. It could explain why people have trouble making sense of the Biblical stories like Abraham being willing to sacrifice his son. Or the story of the Jewish boy who sheds his own blood as an atonement for all of our sins, so that we may be cured of this illness that was given to us when a woman was tempted by a serpent to eat an apple. Maybe we need another way of looking at it.

Are you familiar with Lindow man? 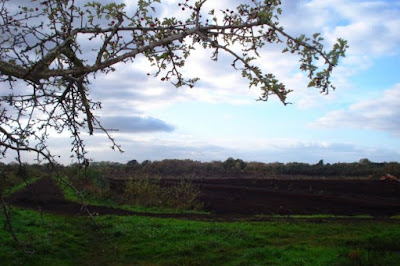 In 62 CE, near the end of the Iron Age, the Romans were on the march. Their goal was to expunge the Druids from Britian. Further on, outside of Roman domination, a Druid Prince, the Fox-Man, senses the coming of the darkness that will accompany a conquering empire. The loss of Queen Bodiccea was senseless, but that was only on the physical plane. Prince Lovernius, The Fox-Man, knew that he had the gods on his side. That is where the power of the Druids lay and where the battle had to be taken.

This is a story of his sacrifice. It is something all humans have somewhere in there ancestry. Sacrifice, both animal and human, are universal themes in early civilizations.

As a Druid, he had spent most of his life in training to direct rituals, a keeper of the sacred rites. He was an ambassador, a philosopher a poet and a theologian. He upheld the virtues of honor, loyalty, honesty and courage. His hair was a dark red, and as a Druid, he grew a full beard.

It is Spring, and the dust of mistletoe is in the air. The feeling of it filling his lungs reminds him of his youth. But there is no time for that. He packs a few meager supplies and chooses two warriors to accompany him. Trade and supplies had been disrupted because of the war, so they only had cereal grains. He brought with him a small jewel encrusted dagger, merely ceremonial. He was taught the ways of war, but was never meant to participate. His hands were not calloused and his nails were manicured.

They went into the woods, away from the roads as they approached the Northern edges of the Roman Empire. He didn’t know exactly when he had crossed the border, but at some point it no longer felt like it was his land.

On the first night after leaving his homeland he had a dream, Taranis,the god of the sky was welcoming him into her home. He asked his warrior chaperones what it meant, but they would only say it was a good omen. On the second night he had a dream, Esus, the god of the middle-earth had prepared a meal for him. He asked the men what it meant, but they shrugged their shoulders and tried to appear busy with things about the camp. On the third night he dreamt of Teutates, the god of the otherworld had prepared a bed for him. He did not trouble his companions with this dream.

On the fourth night, a fire was built unlike the usual fire, there were many small sticks and some moist bark was laid in the middle. A cake was being made, and baking required constant tending of the fire, adding the small green sticks as the fire died down but not letting it get so big that it set the bark on fire. As the cake was nearly finished it started to char and the prince opened his mouth to protest, but only a half of a sound came out as he remembered that the Beltaine-cake would be his final meal.

After a day of almost pure silence except for the sound of their boots in the mud the prince said, “I must hunt for a fox.”

The elder of the two warriors waited for a respectful moment then said, “would you choose a second sire?”

“I would”, said the prince. Neither one spoke of how this would ensure that the young prince would be successful in his hunt and ensure that he would return to camp that night. The meat of the fox went to the warriors where it would provide strength in the physical plane. The prince wanted only a circlet of fur which he fashioned and attached to his left forearm.

The next morning he could smell the Lyn Cerrig Bach bog, the Lake of Small Pebbles. There was no more need for talk. The only thoughts he had were of how to solicit the aid of those on the spiritual plane. Each time his heart leapt at the thought of his own importance he stopped and adopted the proper humble attitude for an audience with the gods. He covered himself in copper pigments to make himself presentable.

They had come to the place where sky met water met earth. He stripped himself of all of the vestiges of this world. The warriors peeled back a layer of the bog. He knelt down in front of it, staring into this doorway. With his head held high and a proud smile on his face, a sinew cord was wound around his neck. As that cord began to tighten, he was struck on the head with an ax. Then struck again, his head now just a weight pressing down to his chest. To complete the triple death that would bring him to the three worlds beyond, using his own dagger, his throat was slit precisely at the jugular.

He was pushed into the bog and covered. After an hour, he almost choked back to consciousness, but only enough to see a vision of a tunnel of light. Then all went black and he lay there for 1,922 years. Long enough for names of Druid princes to be forgotten and the bog to be renamed Lindow. As for the Romans well, they are history.