The amazing chart of everything 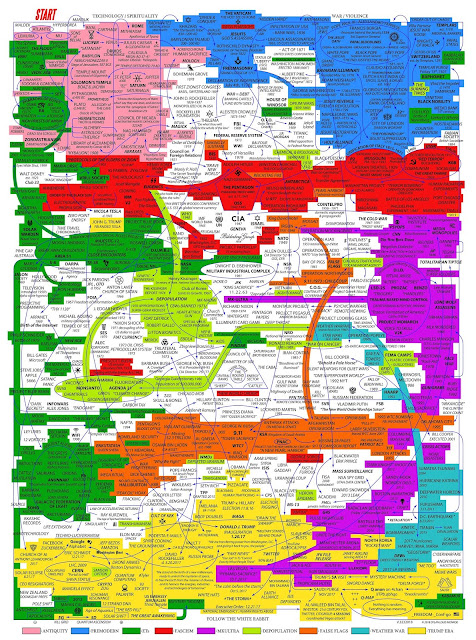 I’m a little embarrassed about how much of this chart I’m familiar with, but I’ve had to look up these things when seemingly intelligent people bring them up and tell me I should be concerned about them. I admit at one time I thought there might be something to the Nostradamus prophecies, but then I simply read what they said. The actual words don’t match the theories about how he predicted the Kennedy assassination. But the guy who made this chart seems to be serious about it, and I’m sure you all know someone who is very serious about at least one of the items found here.

My obsession with this is partially just curiosity, partially the human tendency to gawk at disaster, but it is also rooted in academics. I was in an African American Studies course in my freshman year in college when the people following Jim Jones all killed themselves rather than disband their group and reconsider their life choices. The professor asked us to think about how this happened, particularly why middle class black people joined this group.

Part of it is mind control, making them repeat the ritual without using real poison and barraging them with long speeches about his view of the world over a loud speaker all day long. But cults almost always begin with some reasonable ideas that seem intuitively good. Those roots are usually not well documented and get swept under the longer story that is easily found once the group has some fame. It seems obviously wacko to outsiders at that point, but those who accept it have a history that has altered their intuitions about what is right, so they can justify the wackiness.

Each one of these nodes has a story like that behind it. A story of how it began as someone asking questions that seemed reasonable. They become conspiracy theories when answers are provided that aren’t based on facts, evidence, and logic that is interpreted by people familiar with the full context. People choose the simple answers of the complex inclusive data. This could remain a small group of gossipy neighbors or grow into a political party with actual power.

In this chart, most of it is real names of people, corporations, and organizations, but the connections and the arrows are almost always a stretch. “THX 1138” was really a movie by Steven Spielberg about a guy who escaped a domed city where the government controlled everything with lies and kept people sedated by prescribing drugs. Why that is right next to the “Birth of the Internet”, I don’t know. Further up, in the historical section, the Rockfellers really did monopolize oil in the USA and they did it with nepotism and corruption. Why that is right next to “Ritual Magick” on the chart, who knows?

Harder to miss, the big arcing arrow from scientific discoveries of the modern world to “DEPOPULATION”. You would need to read a lot of stuff that would challenge your credulity of the authors belief in what they were writing to know why Monsanto and Flouridation are on this chart. You might feel like brain cells were trying to escape as you read it, hoping to find a place where reason and logic still exist. What this chart shows is evidence is not needed once you’ve decided to live in a world of fear where you have no power. In that world, it’s better to give up your powers of reason and, according to the logic of that opposite world, then you’ll see what is obvious. 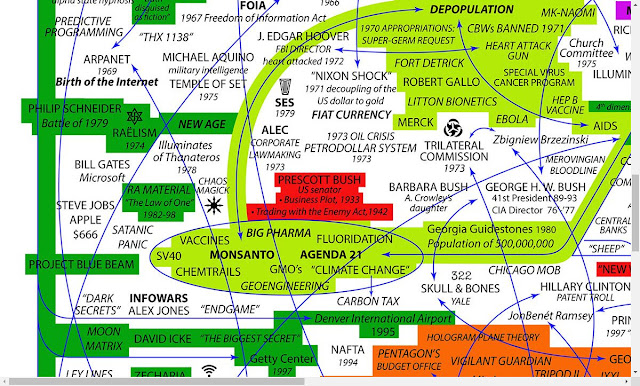 In the world of facts, people do horrible things to each other in plain sight. I couldn’t find “Organized Crime” on here, but we know the names. They walked around in major cities and people loved and adored them. They were treated like the ones who were fixing the problems that the government and police were causing. Meanwhile, they were building their private armies and throwing bodies in the river. Pablo Escobar appears. He financed social programs while also bankrolling corrupt politicians, guaranteeing that those social programs would not have democratic oversight. They got the blame for what was wrong, he got the credit for doing what was right and the power that comes with it.

When you decide that what you see is not real, that you were taught nothing but lies, and that anything that comes from a respected source is actually designed to control you, then everything is part of the giant conspiracy and your best strategy is to do nothing except tell everyone else about how you figured it out. By saying you are questioning everything, you get to feel powerful, but by not using your powers of logic and reason, by claiming your theory is beyond question, you’ve relinquished the power you actually have.

There are of course bad things in the world. Caligula, near the top in the Antiquity section, was a vicious narcissistic ruler. That’s why we say Rome was “falling” at the time he ruled. Democracy was conceived, then faded and came to light again over a thousand years later. This chart seems to connect that re-emergence more to the Illuminati than to the formation of nation states full of free people. No explanation is provided.

Alchemy was a waste of time but as the chart notes, it led to gunpowder. There are good and bad uses for gunpowder but you could say it would be a more brutal world without it. Many items appear on the chart without comment, so it’s hard to say what judgment QAnon is passing on them.

The paradox of “conspiracy theorists” is they will use real conspiracies like Nixon and Watergate, The Gulf of Tonkin incident, Bush lying about weapons of mass destruction, and Jeffrey Epstein as their evidence that governments and rich people are really corrupt, but it’s not “conspiracy theorists” who uncover those conspiracies! The mainstream information sources that are supposedly covering up the conspiracies are the ones that brought those to light.

Conspiracies that actually happen like a President lying on a daily basis or a small family getting rich off of a Pharmaceutical company selling pain medicine, are not included in this chart. Epstein is being investigated even after he died because living people conspired with him, but this chart only has “Pizzagate”. The same people that missed the Epstein conspiracy are now making up stories about how he was killed by the Clintons. This chart was made in 2018, before the Epstein and Sackler stories broke and the QAnon writers are now catching up with them.

There is a big difference between conspiracies where powerful people are lying and hiding information and working for themselves while saying they work for us, and decisions made in the regular course of people trying to figure out how to make a living in a decent and ethical manner. We use toxic chemicals and precious resources to make life better for most people on earth. Billions of people sleep soundly knowing their taxes are supporting a military operation somewhere on the other side of the world that they would never consider participating in. We do our best to discuss decisions like this, requiring layers of oversight and regulating whatever industry gets to profit from the lesser of evils that we eventually choose. We hope that we get the chance to work on the new problems that we caused by implementing the solutions to the original ones. None of this belongs in the same category, on the same chart, as lizard people using the Denver Airport as their secret base.

This chart is the modern version of Greek mythology; mixing historical figures with imagined monsters and giving them all personalities and character traits that attempt to reflect human traits and failings. But the words and actions of the stories didn’t happen in the real world . It’s done in an attempt to try to explain the crazy world we live in, to reconcile what we know is right with all the wrong that we see. It skips over the hard work we need to do to uncover those wrongs. I hope this type of thinking fades and the methods of science prevail and continue to be improved but there is no guarantee. The record of civilizations is not that great, they kind of come and go. Fortunately, even when the powerful and the structures they built fail, we still have each other.