Intro
I blogged sometime ago on the emergent church and Solomon’sPorch. More recently I discovered a blog by one of the leaders of that movement and that specific church, Tony Jones. I really like the guy. He is pro-LGBT, pro-love, pro-thinking, not afraid to ask questions. Lately he has been talking about liberal Christians. I’m not sure what he is trying to say, but it is something about how they don’t say enough about who God is.

He gave an example of some wild youth pastors who on their recent podcast, he says, “repeatedly and forcefully said things about who God is and how God acts.” I listened to that whole podcast, then repeated parts of it and heard the two hosts, Tripp and Bo (yes, really, Tripp and Bo) skirt issues, talk about what God is not, and a few times say something right out of standard texts about letting Jesus in and how it will change your outlook on life.

Tony challenged progressive theological bloggers to writesomething substantive about God. I’m not one of those, but I used to think I was, so, here goes.

The podcast that I will be referring to is here. The audio is linked in the small print between the two graphics after the blurb and before the comments. The first few minutes is announcements. I provide a couple spots to skip to if you can’t handle the whole thing.

If someone were to ask me what I believe about who God is, the first thing I would do is correct the question. The question is, what is God? God is not a “who”. God is neither male or female, old or young, you can find that in the Bible. God is a term that is used as a placeholder for things we do not yet understand. God has always been everything, the original cause. We don’t understand either of those. When we didn’t understand lightning or rainbows, God did it. When we made our way around the world, learned to feed billions and travel toward the stars, we had less need for God, but we still don’t understand how to live with each other and not kill each other, so we keep the old books around. We keep hoping for an answer.

Some say we have lost our ability to talk about God. Pastors and theologians who are labeled progressive, liberal or even just mainline, talk about social issues but not about how Christ moves in the world. This is somehow considered a problem when compared to those who are usually labeled conservative. They are often very specific about God acting in response to a flood or in the heart of a child or helping us win a battle overseas or perhaps even cure someone of a disease. I can understand why someone who wants to have a serious political discussion would not use those terms.

But let’s examine someone who uses contemporary language, someone who reaches the youth of today and gets them to go fix up houses for elderly people on their summer vacation.

In the above linked podcast, about a half hour in, a discussion of the Sermon on the Mount begins. Good, basic advice on leading a decent life until you get near the end then it talks about not getting into heaven if you mess up. Tripp and Bo address this around the 38 minute mark. Tripp talks about wrath using the specific example of the consequences of lying.

That is, he says a common way to express the consequences that lying inevitably leads to is to say the wrath of God has been delivered upon you. But then he says that we don’t need to call that "wrath", rather “that’s what happens when you think that the broad way that leads to destruction is how you’re supposed to live” as opposed to the narrow way that leads to the good life and eventually heaven.

What he is saying is actions have consequences. He is simply tacking on God language and praising Jesus for providing the narrow path. The only thing that is a little unusual is that he lets God off the hook for whatever consequences one might discover on the broad path. This really doesn’t matter and changes almost nothing theologically.

The conclusion, that it is better to just not lie, as well as others that they discuss, can be arrived at independently of Bible study, independently of accepting Jesus into your heart. They almost say that, but then tack on that the “narrow way leads to life”. They provide no explanation of how that works. They don’t explain how prayer offers any type of nourishment. They suggest that making wise choices will most likely lead to happiness, but a lot of non-Christians know that. They discuss some of the actual ways lies lead to trouble, but just assert that not praying is bad.

Another example. A little after the 52 minute point, Bo comes in with an impromptu play with Tripp playing the role of a Christian who wants to justify violence. Tripp’s character confronts Bo with the classic questions of what would you do if someone is raping your wife and 'what about Hitler'. He does not supply any details, but he says that there are alternatives to violence and that the few passages about Jesus flipping over tables or telling the disciples to go get swords are far outnumbered by the peaceful passages, so Jesus is peaceful, end of discussion. All those years I spent in Bible study and all I had to do was count up passages for and against. Yay, peace wins, spread the word.

Tripp comes back with an impassioned story of a time when he was fretting over understanding Jesus and how he fit into the grand story, theologically speaking. One of his mentors got him to read the gospels and “tell me about the beautiful parts”. This got him to stop trying to figure out philosophical arguments for the existence of God or explanations of the Trinity and just love the Bible and look into the world and think about how he could bring that love to the world.

Well, that’s awesome. Unfortunately a lot of people read the Bible and enjoy the parts where Jesus says he’s going to separate the wheat from the chaff and throw the chaff in the fire. They are inspired by that and think it is their duty to find some of that chaff and burn it for Jesus now, save him the trouble. A quick look at who is running major corporations and getting into congress lately and you’ll know this is not just some fringe problem.

Liberal/progressive/mainline theologians understand this. That’s why they don’t use emotionally charged language about blindly following invisible voices, they know what it leads to. They tell a story about a man who told others to put away their swords and stuck to his principle of non-violence even in the face of death. Then they talk about how to work for peace with justice without laying down your life. I don’t have a problem with that and can’t figure why Tony does.

When Tony says, “progressives write lots of books and blog posts about social issues,… but we don’t write that much about God.” What I hear is, these so-called progressives are taking the next step. Instead of looking to the Bible, finding “the beautiful parts”, i.e. the ones you agree with, then trying to bring those into the world, they are simply finding beauty in the world and acting accordingly.

The Bible contains luminous stories that can help us start discussions about healing and caring. A lot of books do. We should be reading all of them, discussing all of them. We should be moving forward and writing our own stories. Instead Tony is asking us to figure out this one character that has been used and exploited by hundreds of generations and changed so many times that no one could possibly make something coherent out of it. Sorry Tony, but that’s who God is. If the old books tell us anything, especially the later ones like Romans (see 13:8), it’s time we started figuring things out for ourselves.

My wife likes to tell me about her dreams. She often ends with, “What does that mean?” Being a believer in reference material, I bought her a book that lists things and tells you what they mean if they appear in a dream. They are pretty silly, and not too long after that, she told me someone had said that getting those books is the last thing you should do for dream interpretation. It is better to think about what is going on in your life and try to come up with allegorical explanations of the dream that help you tell your own story. That’s how I felt all along, so that has worked out well.

In the Koran, there is a nice little piece of poetry about a dream Muhammad had. He flies far away and meets spiritual leaders of the past and then meets God. This is sometimes referred to as “The Night Journey” and is the basis of the legend of the “Al-Aqsa” (farthest) mosque. The Al-Aqsa mosque that was later constructed is also called “The Dome of the Rock”. You’ve probably heard of it.

But first the dream. Muhammad studied religion and was writing spiritual material. Clearly, in this dream he is seeing himself as worthy of the company of the great prophets in history. His writings draw for Judaism and Christianity and some case could be made that they offer some improvements. 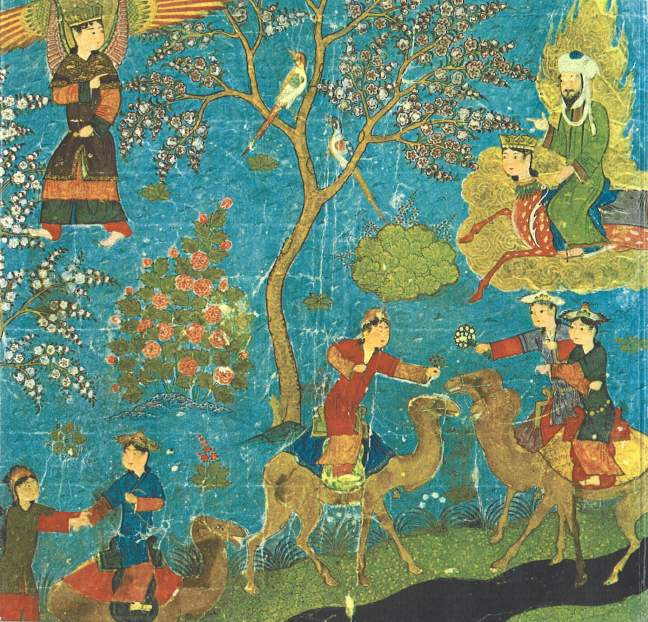 The details of that don’t really matter to me. In the end, they are the writings of a man (or possibly men). They prove nothing. We all have had dreams where we are flying, so discussions of whether or not he actually flew that night are just silly. Discussions of where he went are equally silly, but Islamic scholars did just that, at length, before actually building the mosque. Fighting over it, well, do I have to say it?


What would be less silly is if we all had this dream. Or we could just close our eyes and visualize it. We are all just as good at thinking about what is right and how we should lead a just and noble life as anyone who wrote about it 1,500 years ago. Most of us could spend 10 minutes with the 10commandments and improve upon them. Anyone could take a red pen to Shari’a lawand clean it up. Go ahead, take your place with the great prophets of history, you have my permission.
Posted by LaustenN at 7:58 AM No comments: