Atheism for the Religious and/or Spiritual 7

I realized I was not a Christian the day that I no longer accepted Christ as my savior.

There are a few people out there that would argue with that statement. That is, there are a few who would define what it means to be a Christian in a different way. Some would argue that it was when I stopped believing in hell, or miracles, or prayer or anything else in the Apostle's Creed. There are a few who would say I was never a "real" Christian". Ultimately, people's opinion about what a Christian really is, doesn't really matter since there is no way to reconcile all of them. And yes, I realize it matters very much to the individual who holds the definition. What is important, is that I can enter the doors of many churches and be welcomed just as I am.

At some point, someone inside that door will start asking me about my beliefs. The difference between mainline and fundamentalist churches is how quickly that happens, and how much it matters what I say. Currently, I'm a member at a church that knows exactly what I don't believe, and still welcomes me. They aren't expecting me to be "on a path" or worried about my soul. They actually welcome me. This is not as rare as you might think.

I wish I could say more about great conversations I have at this church about spirituality or quantum physics or other relevant matters of the day, but honestly, I hardly ever go anymore and even when I did, those conversations were sometimes great but not often and almost always brief. I'm sure if I went there regularly and spoke about the latest evil Bible verse I found, they might not welcome me quite as much as they do now. That's fine. Let's not get carried away. 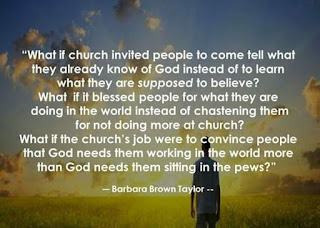 The pastor there made a social media post of this quote from Barbara Brown Taylor. I'm sure it's sincere, that it is what he wants, but I understand why it's difficult to build a church that really does this. It's not what church traditionally is. We're not to the point where I can say, "traditionally was". They have to offer what people expect when they walk in that door. It's also very hard to advance in the hierarchy of an organization if your mission is to constantly question that organization and its hierarchy. I don't expect any of this to change soon. There will likely be continuing splits, scandals and bankruptcies as we move in that direction.

But as Ryan Bell said to Gretta Vosper, "A church can't call itself progressive if it doesn't keep progressing." That is a challenge for a large organization. I suppose there will have to be a conversation at some point about how to make that progress while keeping tradition somewhere or somehow. But that's not my conversation for now.

What I did, at some point, instead of walking through those doors and waiting to see how long before they asked me some theological test question, I started asking the questions as soon as I got there. Are you LGBTQ affirming? Do you have open communion? Do you preach a literal hell? Does membership require a faith statement? What kind of books do you use in your adult studies? As yet, no one has passed my test.

Acts explains some of the tests for Christianity
Peter talks in credal language
Galatians discusses judging people on their fruits, a better system than most in the Bible